From the Ground Up

About six years ago I taught a Sunday school lesson with a brother in Christ at an urban church in Toronto. By profession, he was a teacher with a Ph.D. I worked as a documentary filmmaker and part-time youth pastor.

A four-year-old who was a newcomer to Canada and to our church raised her hand. “Did Jesus ever live in Africa?” she asked. The little girl was from Nigeria.

I understood her question on a few levels. She wanted to connect herself and the continent where she was born with our lesson. She wanted to belong in this new land with new people and affirm the common ground she knew she had in the pages of the Bible. My co-leader, of Anglo-Saxon descent, quickly responded with, “No.”

He continued to say that the name Africa is not mentioned in the Bible.

I could not believe what I was hearing. The little girl withdrew and sank into her seat. Quickly, I found a world map and turned to Matthew 2:13–23. While the names of continents aren’t mentioned in the Bible, I knew that Egypt has not changed its location since Jesus was born. It’s still in Africa. I shared with the class that there was a Jewish population in Egypt at that time, and that Mary, Joseph and Jesus fled to that country, a safe haven for them in Africa. I could see the young girl was relieved.

I had to speak up.

When I was in high school, I attended Black history classes on Saturday mornings. It amazed me to learn that, genetically speaking, we human beings are 99.9 percent the same. While two people might look significantly different from each other, the actual genetic difference based on physical characteristics is tiny.

It’s hard to fathom that a tiny 0.1 percent of genetic variation has been used to justify colonial oppression around the world and acts of genocide throughout history. Pseudoscience over the last 500 years, eugenics and politically driven biblical exegesis used racial classifications to justify the transatlantic slave trade. The Nazi regime used the social construct of race to murder millions of Jews and other (mostly racialized) minorities. The myth of racial superiority was also a motivating factor in the theft of land, cultural genocide and killing of millions of Indigenous people in North America.

Skin colour is not a helpful way to categorize people, but differences between people do matter. Instead of someone telling me they’re colour blind when they look at me, I would rather someone see my skin colour. If they see me, they can journey to understand more about me without defining me by my appearance.

I’m thankful my skin is brown and laden with melanin, and I’m also aware of the barriers I encounter because of it. God created people with incredible diversity. As Christians we can also have incredible unity.

I’m learning how to navigate this diversity in unity.

My journey as a child of God, a racialized settler and a Canadian is converging into an identity that calls me to pay closer attention to the ways Jesus navigates difference. I am a person of colour with African ancestry. I am the son of a Jewish/Jamaican father and husband to a woman of European descent. I am the father of mixed children and an Indigenous child. I am a child of God who grew up in one of the most multicultural cities in the world. 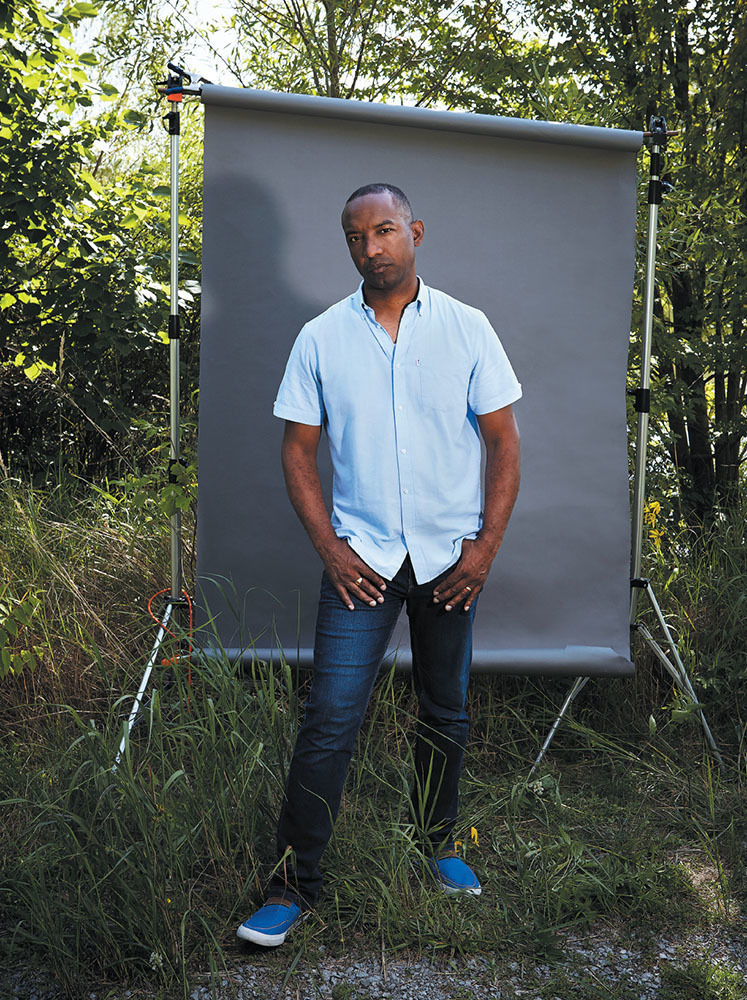 Can I be racist at the same time as I am affected by racism?

My heart groans when I remember George Floyd’s head on the ground and hearing his voice cry out for help. I could only watch two minutes of the eight-minute video that captured his death. I speak out against anti-Black racism. I have marched to support racial justice. I will stand in solidarity with Indigenous friends. And my heart breaks for Canada. God is placing my heart firmly on the land where I live, and is inviting me to “walk in a good way” in this place. Is land-based education important for Christians in Canada? My wife just reminded me that Genesis 2:7 states that God formed the first human being of dust out of the ground.

“Who is your neighbour in Stouffville?” I can almost hear Jesus ask me that question.

Mix salt into a clear glass of water and it dissolves. The entire glass is saline. The salt has become invisible. Racism is mixed into Canadian society in a similar way. It is all around us, hidden in our histories. It is dissolved into our land and our laws and, like salt in water, so difficult to remove from our “home and native land.”

When I ask myself how I benefit from racially motivated injustices in Canada, my heart drops onto the land. I know the land I live on holds secrets and a rich history that needs to be unearthed.

Recently, RCMP commissioner Brenda Lucki acknowledged the role of systemic racism in the RCMP stating, “Throughout our history and today, we have not always treated racialized and Indigenous people fairly.”

“Setting the table for an antiracist and antioppressive way of living starts with a call from God to examine my own heart.”

According to data from Statistics Canada and a report from CTV News, “An Indigenous person in Canada is more than ten times more likely to have been shot and killed by a police officer in Canada since 2017 than a white person in Canada.”

How can we address systemic racism as followers of Jesus? Confession and repentance are essential to journey toward right relationship with Indigenous Peoples. But do we know what we need to confess? Have we examined what previous generations of Canadians have done and left undone, and how the systems they set up and we now live in discriminate unfairly on the basis of race?

Embracing my identity as an evangelical Canadian and a person of colour must also include journeying deeper into my identity as a racialized settler and treaty person in Canada. Every day I’m thankful for the beautiful community in which I live, but I’m learning more about the disrespectful ways Indigenous stories and histories have been buried and minimized, even in my own community.

I benefit from land once home to a large Huron-Wendat village that holds cultural and historic significance in North America. Without properly consulting Indigenous people, over 100,000 artifacts were removed from an area that’s now called the Jean-Baptiste Lainé site. A stormwater pond has been built on top of it. It is just down the road from my home. I wrote most of this essay sitting on that site. The land cried out from around me as the sounds of a new construction site clamoured in the close distance.

No, I didn’t directly steal land or disrupt artifacts in an important region of God’s creation, but I benefit downstream from it.

There was a time I thought I just lived on Greenhouse Lane in Stouffville. Then I learned a key detail about my home at a work meeting with the Indigenous-Settler Relations Working Group of The Evangelical Fellowship of Canada, a group of Indigenous and non-Indigenous leaders. As we introduced ourselves I shared what I knew. I knew less than I thought. One of the leaders, Adrian Jacobs, keeper of the circle and principal of Sandy-Saulteaux Spiritual Centre, shared with me a much more complete picture of the land I live on. I learned more about the people and how their descendants – and their stories – live on in the Wendake community in Quebec.

I’m called and compelled to build bridges with Indigenous Peoples and with people different than I am. In my EFC work I’m developing a relationship-building and educational resource with Jim Thunder, an Indigenous teacher and leader.

Our work together may be a small contribution, but it’s part of a larger journey toward right relations between Indigenous and non-Indigenous peoples outlined in a paper composed by members of The Indigenous-Settler Relations Working Group (www.TheEFC.ca/StewardingSacredSeeds).

Another contribution I’m part of happens in my home. One of my sons has Mi’kmaq and Jamaican roots, so we learn words from each language at home. Jamaicans say, “Walk good,” and various Indigenous Peoples model, “Walking in a good way.”

If Paul wrote a letter to the Canadian Church today, I’d like to imagine he would prioritize building relationships between Indigenous and non-Indigenous peoples. Trust has been broken. Setting the table for an antiracist and anti-oppressive way of living starts with a call from God to examine my own heart. It is the heart of Jesus that compels me in this direction and to this question: Does my heart still break?

We benefit from broken treaties, betrayed trust and other people’s bad news. It is time to address this as an institutional sin issue.

Jesus gave up privilege. He relinquished power. He made the ultimate sacrifice. Jesus calls us to love in radical ways. Are we willing? Love like that can hurt. It’s painful. Love like that makes space at the table, even if it means losing our seat. It goes the extra mile, then goes another mile again for someone in need.

Love like that is how people will know who we are. Increasingly, for me, following Jesus must include following His example to build relationships with people different than I am.

Are we willing to follow Jesus in this long walk in a good way? Does your heartbreak when you think of George Floyd on the ground with a knee on his neck? Does your heartache for the relationships that have been broken throughout history with Indigenous Peoples and the land?

The life of Jesus offers models of restoring relationship with God and with our neighbours. Even though Samaritans and Jews didn’t associate with each other, Jesus crossed cultural and ethnic lines to present hope to a Samaritan woman at a well. Jesus spoke up for and interceded on behalf of people who were forgotten, marginalized and oppressed. He gravitated toward people different than He was.

Jesus has a plan to restore all things. We are invited to be part of it.

I close my eyes and imagine my breaking heart resting in God’s hand, and I imagine it also firmly here on the ground, still beating.

I offer my learning heart to you, too, along with the beautiful Mi’kmaq word for love my family has learned and cherishes. My wife says it out loud often in our home, so it becomes part of how we talk and live. The word is gesaluet. We are richer for knowing it, and stronger for trying to live it.

Joel Gordon is a filmmaker, actor, pastor and the Creative Director at the EFC. Since his early teens, Joel has been acting in television and film. After studying acting at York University and completing his BFA, Joel started to produce and direct television documentaries. In 2013 he produced a magazine and TV series called Love Is Moving that features youth groups living out God’s love in their communities. Joel is passionate about guiding his own children into a deeper relationship with God and also about sharing stories from youth and young adults across Canada through EFC’s magazine, Love Is Moving.

Making the Best Use of Your Time

Who is Jesus? Human, God, and Perfect Sacrifice

How to Meditate on Scripture