By anyone’s reckoning, 2020 has been an unusual year.  Of course, no one will be able to talk about 2020, without speaking about COVID-19.  But let’s not forget the “Black Lives Matter” protests, especially in the United States.  Let’s also remember that racial sensitivities caused several Sports Franchises to change their names.  The Washington Redskins are now simply the Washington Football Club.  They have rightfully recognized that these titles are not only insensitive but create racialized stereotyping.

On the global front, the World Economic Forum has been talking about a need for a “Great Reset”.  Included in these talks are a turning from non-carbon-based forms of energy, as well as a new relationship among the world’s nations.  Conspiracy theorists are having a heyday!

Our neighbours to the south have gone through a very bitter election period.  The far left has had its day.  But among others, the current sitting president was hailed as the Messiah.  Apocalyptic scenarios were constructed by both sides, should the other side win.  How you voted was a statement of your moral condition.  I can’t remember greater political polarization, followed by extremist views, than what we have all seen this year.

As a Christian, I have been contemplating the gospel.  I have been thinking about the truth that there is no mediator between God and man, but the man Christ Jesus.  I have been thinking about the glory of the incarnation, that God the Son, in obedience to God the Father, has stepped into this sinful world, tabernacled among us, and was found clothed in human flesh.  I have also been considering the heart of the gospel.  That Christ died for our sins, so that all who believe in him, might have eternal life.  And I have thought about the Kingdom of God.  The kingdoms of this world will all one day be no more.  In the end, Christ’s kingdom will utterly triumph.  For this reason, Christ is our only hope.  Salvation is found in no other name.

What I have just said, goes against the grain of the present narrative.  On the political front, we have found people more polarized than ever before.

Let’s say the obvious.  In the present dispensation, no nation can be called a holy nation.  That title belongs exclusively to the church of Jesus Christ.  1 Peter 2:9 says, “But you are a chosen race, a royal priesthood, a holy nation, a people for his own possession, that you may proclaim the excellencies of him who called you out of darkness into his marvelous light.”  No, America is not the city on a hill.  That title belongs to the future kingdom of our saviour.

Tim Horton writes, “The ‘good news’ is not moral improvement or a Christian society or any political system—whether democratic or totalitarian, capitalist or socialist. It’s the announcement that in his incarnation, obedient life, sacrificial death, and resurrection Jesus Christ has accomplished redemption from sin, death, and hell and reconciled sinners with God.”

It’s time for Christians to have our own “theological reset”.  Let’s stop placing our hope in the power structures of this world.  Let’s recognize that the separation of the church and state was not a leftist idea, rather, it was our idea!  Let’s preach the gospel, not to reform our nation.  Instead, let’s strive to bring men and women to Christ.  Let’s stop hoping for help from this world’s power structures.  Let’s put our hope in the power of the Holy Spirit.  And let’s not forget what Christ’s kingdom truly looks like.

Let’s remember the vision of Revelation 7:9–10.  After this I looked, and behold, a great multitude that no one could number, from every nation, from all tribes and peoples and languages, standing before the throne and before the Lamb, clothed in white robes, with palm branches in their hands, and crying out with a loud voice, “Salvation belongs to our God who sits on the throne, and to the Lamb!”

There’s the holy nation.  Any other claim to that title is heresy! 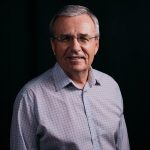 Dr. John Neufeld is the Bible teacher at Back to the Bible Canada with 30 years of experience, serving in pastoral ministry, both as church planter and senior pastor. Known both nationally and internationally for his expositional Bible teaching, Dr. Neufeld has spoken widely at churches, conferences and seminars throughout North America, and internationally.

Are You Living an Authentic Christian Life?